1984, the year that George Orwell wrote about, the year in which Macintosh revolutionized the world of personal computers, the year which is legendary in more than one way. It is also the year in which “Ambush Marketing” concept was born. Before 1984, every Olympics that was hosted had a string of sponsors taking the number up to 628 at one point. In short the Olympic officials thought it was diluting the brand image. So in 1984, for the Los Angeles Olympics, only a set of sponsors were selected making the brand that sponsored selective and prestigious and at the same time opening the door to ambush marketers.

The term “Ambush Marketing” was first coined by the marketing guru, Jerry Welsh. It is defined as a covert marketing strategy in which rival companies ambush an event officially sponsored by a competing company for exposure. That in simple terms means hogging the limelight away. While the legality still stands under consideration, it sure is an entertainment for the audience.

Fujifilm won the official sponsorship in the Camera category during the Olympics in LA. But Kodak, its long standing market enemy, had to ge      t back at Fujifilm. So it signed a deal to sponsor the broadcasts of Olympics. And as the broadcasts had a much larger audience than the live events had, Kodak played its own ads during the airing. In addition to this, Kodak also sponsored the US track team. Due to the mass exposure Kodak got as a result of this, people thought it was the official sponsor and not Fujifilm.

Reebok paid over $20 million to be the official sponsor of the 1996 Atlanta Olympics. But Nike left no stone unturned to show who’s the boss. Every billboard in the city was plastered with Nike ads, there was a Nike building built overlooking the Olympic Park and Nike was the heart and “sole” of many athletes! And anyone who has seen the games could not forget the golden Michael Johnson shoes that bore the famous swoosh logo.

‘Tis the story of two “rivalen” from Germany. One of their epic face offs took place on billboards. Audi put up a billboard saying:-
“The entirely new Audi A4. Your Move, BMW?”

And BMW came back with one of the wittiest repartee
“Checkmate”. 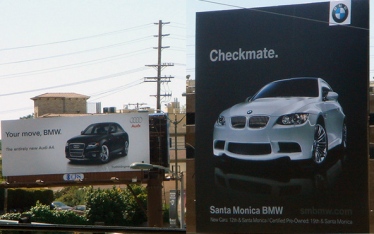 Who cares what the courtroom battles resulted in, Samsung won when it came to the street fights! When Apple was scheduled to launch its iPhone 4S, Samsung rented a pop-up store mere meters away from the Sydney Apple store to sell Samsung Galaxy S2. It also offered a $2 discount to the first 10 customers. Some people who would have otherwise stuck to the Apple queue got tempted to join the queue for the Samsung phone.

During the 2006 FIFA world cup, Bavaria Beers distributed free orange leeuwenhosens (Orange being the color of Dutch) to scores of people on the day of match between the Dutch team and Ivory Coast. FIFA authorities had anticipated the attack and asked the people in the orange leeuwenhosens to disrobe and these people watched the match in their underwear. By making this epic mistake of forcing people to watch a match with no clothes on, FIFA helped garner much more publicity for the Bavaria beers whereas the event was officially sponsored by Budweiser.

This article has been written by Ankita Jena, PGP-1 student at IIM Indore.

My Tweets
We are delighted that the Delhi (NCR) Chapter Inaugural Meet for IIM Indore alumni was conducted successfully on 11 January 2020. Here are some glimpses of the same. Prof. Keyur Thaker, Indian Institute of Management, Indore updated the guests on the initiatives taken to strengthen alumni engagement. The event was attended by 105+ alumni across different programs and batches. We would like to thank the volunteers Vikash Thakur, Vidit Varshney, Gargi Pandey, Yash Jain, Alok Kumar Singh, and Pranav Pathak for taking the lead to organize the meet and to everyone who attended the meet. We hope to see the same enthusiasm for the events to come.
Indian Institute of Management Indore bagged the second runner up position in the Airtel Icreate Product Finale 2019. The two bright minds from the institute Saikumar U and Subhavignesh Neelakandan proposed a new scalable and minimum capex business model for FTTH broadband service deployment across India. With the year about to end , we hope the coming year gives us more opportunities to share IIM I laurels with you.
Triple Crowned 👑 It's a matter of great pride for us to announce that IIM Indore is now the second business-school in India to get accreditated by all three major accreditation bodies AACSB, AMBA and EQUIS. Less than 1% of business schools in the world are granted triple accreditation. Congratulations Planet-I family!
Team IIM Indore emerged as the winners at the #RPGBlizzard2019 Grand Quiz conducted by Quizmaster AK Rahman. 9 teams across 9 campuses battled it out at the finale to earn the title of champions. Congratulations to the winners, Siddhant Singh and Shoumik Bose! @rpgoncampus
Footprints 2019, the annual alumni meet, was one big event! IIM Indore witnessed the nostalgia and the smiles of the alumni who after months, years and days got back to planet-I once more and relived those chilly nights, late night coffee sessions and cherished bonds. #footprints2019 #reunion #campuslife #iimi
The week-long showdown of athleticism, sportsmanship and teamwork, Chunauti 2019, culminated this Wednesday with the award ceremony celebrating players from all courses. This year, the winning trophy of the intra IIM-I sports fest was lifted by the IPM batch. #Chunauti2019 #SportsComIIMI
%d bloggers like this: