There is no denying the negative impact that war, terrorism, and political turmoil have on a country’s economy, since this has been empirically demonstrated by the field of economics. Terrorism’s harmful impacts now ripple out to neighbours and trading partners as the world grows ever more interconnected and economically intertwined. There may be no physical harm done, but every country’s safety and prosperity are at stake. This week’s Macroscan delves at the economic repercussions of terrorism, from the shortterm costs to the long-term macroeconomic effects and counterterrorism expenditures. Have a wonderful and enlightening time reading!

Terrorism is defined as the use of violence or the threat of violence with the intent to intimidate the people. Terrorism is a concern in a wide range of countries. Factors such as religion, philosophy, politics, historical legacies, ethnicity, poverty, illiteracy, and corruption may all have a role in the greater spread of terrorism in some countries than others. Terrorist groups, shockingly, rationalise their actions by claiming their members are no different from any other soldiers fighting for their country. Terrorists, however, create this fundamentally flawed rationale to justify their evil acts. There is a stark contrast between a member of the armed forces and a terrorist. In contrast to soldiers, terrorists never accept blame for their actions. Terrorists may seek to achieve their goals by bringing public attention to the grievances of their group, eliciting sympathy for the group’s unfair or unjust situation and the cause, drawing attention to the state’s inability to provide security, polarising the populace to simplify complex debates and arguments, pressuring the state into compromise solutions, or compelling the state to take repressive measures that discredit the government.

The life loss during the act of terrorism is devastating, and the economic impacts are larger than we realize. The direct loss to the economy includes destroying buildings, machinery, transportation routes, religious places, schools, and universities. The destruction of these properties directly harms the country’s infrastructure and economy. Large-scale attacks, such as the World Trade Centre bombings on Sept. 11, 2001, and the Mumbai attacks on Nov. 26, 2008, can destroy billions of dollars’ worth of property and senselessly kill hundreds of thousands. These attacks push the country a few years back in the sense of progress, as the country’s productive capacity is reduced and extra resources are spent to cover the gap caused.

The cost is not limited to the destruction of property, but it costs a lot to tackle the aftermath caused. Different industries and institutions need to be compensated, and people who lost their life and property need to be compensated either by the government or the insurance agencies. These attacks spread fear and a sense of insecurity among the public, and to tackle it, more money is invested in defence and security services. The labour which could have been working in other sectors is now deployed in the defence and security sector. The estimated cost of the toll and physical damage of the 9/11 terrorist attacks. Including indirect effects such as economic impact (estimated at $123 billion) and increased spending on homeland security, the total impact is estimated to be around $3.3 trillion. The estimated property damage was estimated around $40 Billion, and to insurers, it cost around $4 Billion. The defence spending rose by 23.7% ($28.9 Billion) for the next fiscal term.

Increased Uncertainty in the Markets

It’s not just the people living in a particular area that is impacted. The impact of any attack is deep-rooted, and it scars many. The Financial markets are one of those, they destabilize after any such impacts, and after 9/11, the market did not really recover until months after the 2003 invasion of Iraq. The Financial market doesn’t stay affected for long, but repeated events in any country create distrust about the stability of the financial market of that country. There was not much impact on the stock market after the terrorist attacks in France killed at least 129 people in 2015. But the deadly attack in Nice, France, in 2016 only adds to the sentiment that France may be an increasingly unstable place to live and do business in. 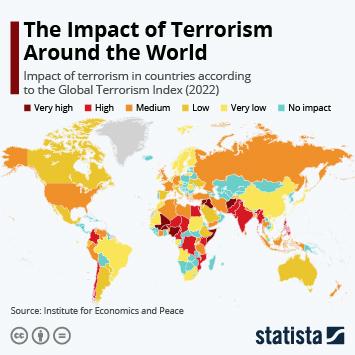 Insurance, International Trade, Tourism, and FDI are a few industry aspects that are negatively impacted by terror activities, and there is no way to estimate the real loss that occurred. The insurance industry cannot predict the amount of loss it will have to bear and cannot charge the optimal premium. At the same time, it has to pay most of the compensations as the property and life damage are generally high profile and insured by a big premium. The insurance cost of the 9/11 attacks totalled about $50 billion in 2021 dollars, including commercial liability and group life insurance claims. Tourism is even more concerning, during the 26/11 attacks in India the tourist casualty was higher, creating a sense of insecurity among the tourists. The GDP contribution of the Tourism industry is around $ 121.9 bn, which is around 6-7% of GDP. There was a significant 20% to 25% drop in tourist arrivals. Terrorism harms international trade on a larger scale. This could be due to imminent threats, such as disrupted trade routes and distribution systems, or to psychological and physical reactions to terrorism. This means less foreign direct investment (FDI), particularly in volatile countries.

During such stressful times of conflict, the governments have to take strict actions backed by the nervous citizens of the country, who are far more inclined to give up economic and political freedoms in exchange for security. This results in higher taxes, higher government deficits, and higher inflation. During wartime, the government often implements price controls and sometimes even the nationalization of industries. This leads to inefficient uses of the national resources as the public sector is not so much equipped of handling resources as the private sector is. And these changes are not reversed when the situation becomes normal, and they tend to stay inefficient for a long time. The final risk to the economy is a political risk, these attacks give rise to skepticism of foreign cultures, businesses, immigrant workers, refugees, and sometimes the religious minorities in the country. Which might lead to violent protests and riots. This has already been observed in the United States, after 9/11 the borders were closed down for the migrants, Visa procedures became stricter, leading to a decline in the availability of cheap labour, and the student application rates also declined.

Terrorism is unwelcomed because it not only kills people but also destroys infrastructure and industry, stifling overall growth. After its independence, India has repeatedly felt the sting of terrorist activities. Poverty, unemployment, inequality, and other socioeconomic issues are linked to violent and terrorist acts. Recent years have been seen as critical years for the Indian economy, and analysts believe the past will continue to overshadow events for a long time. Leading indicators can forecast future growth based on what has already occurred, but they cannot account for the impact of unexpected external shocks that may have an immediate impact on the economy. Despite these threats, economists here appear to be quite confident that the government, with the help of several counterterrorism measures, will successfully handle the situation in the near future and enable our economy to reach new heights.

The Economics and International Business Club